A central challenge for ecology is to understand the dynamic nature of species interactions. A classic approach to community ecology assumes that individuals within a species are functionally identical and that consumer-resource dynamics can be predicted solely by using species abundances. However, one species can consist of multiple functional groups, as diet differences among life stages of a single species may be greater than the diet differences among species. Because of variation in diets over a lifetime, we must ask: under what circumstances can individuals be simplified into a collective species, and when does it matter to focus on intraspecific variation? I examined the role of stage structure in species interactions and its consequences across levels of biological organization.

In chapter 2, I conducted a functional response experiment in the laboratory to examine the role of body size, temperature, ontogenetic stage, and larval stonefly density on crayfish feeding rates. I found that the effect of temperature was stage-dependent as juveniles increased feeding with temperature, whereas adult feeding rate was similar across temperature treatments. Adult crayfish reduced their attack rate with increased stonefly density, which is either reflective of their biology or an artifact of experimental

In chapter 3, I used metacommunity theory as a lens to explore how crayfish ontogenetic stage and sex alter the effect of diet on gut microbial communities. There was little overlap in the microbial community between crayfish in the lab and those in the wild, indicating that gut microbes are transient. The similarities in microbial community composition between food items and crayfish suggest that their gut microbes are mainly from their food and not from the surrounding environment. There were stage- and sex- dependent effects on gut microbial communities, likely due to differences in behavior and physiology between the stages and sexes. Though stage, sex, and diet influenced gut microbial communities, they had low explanatory power. Addressing connectivity between hosts or feedbacks between the host and the environment on gut microbial communities are potential avenues for future work. Species introductions can alter the relationship between trophic interactions and ecosystem processes. Often, introduced species reduce the abundance and diversity of biota in recipient food webs. However, ontogenetic diet shifts in the introduced species can alter the presence, degree or direction of these impacts on native species, making it difficult for scientists and managers to predict the ecological consequences of species introductions. In chapter 4, I conducted a manipulative field experiment to assess the effects of crayfish species identity and ontogenetic stage on benthic invertebrate composition and abundance as well as leaf litter breakdown by native signal crayfish (Pacifastacus leniusculus) and introduced ringed crayfish (Faxonius neglectus neglectus). Treatments with signal crayfish or adult crayfish had higher reductions in leaf litter relative to treatments with introduced crayfish and juvenile crayfish. Alpha and beta diversity of benthic invertebrates was similar among treatments, but there were fewer shredders in treatments with adult crayfish. Thus, I show that ontogenetic stage and native vs. non-native status both matter for understanding the impact of species introductions on local ecological communities and ecosystem processes.

In Chapter 5, I presented the challenges of uniting ecological theory and empirical data. I designed an experiment that investigated the roles of consumer body size and ontogenetic stage, environmental temperature, and resource quality on consumer-resource interactions. My goal was to bridge the Metabolic Theory of Ecology and Ecological Stoichiometry to describe how the balance leaf litter nutrient availability and crayfish elemental demand govern their feeding rates and nutrient cycling over ontogeny, but my models did not fit the data well. This developed into a philosophical dilemma: as scientists, do we choose to work in systems that will produce data that we know will fit our model, or do we test a model in various systems to see how generalizable our predictions can be? I explored the culture of science, focusing on the existence of paradigms in ecology that discourage “negative results” and the obstacles one might face in conducting functional response experiments. Specifically, I reviewed experimental design and statistical methods used in functional response literature and how they can be biased to maintain paradigms in ecology.

My dissertation contributes to our understanding on the role of intraspecific variation in ecology. I examined consumer-resource interactions (Ch. 2), community structure (Ch. 3), and ecosystem processes (Ch. 4 and 5) to assess the effect of stage structure on species interactions and their consequences across multiple scales of organization. I illustrated the challenges of bridging ecological theory and empirical data and the approaches that hinder or advance the field. Overall, my work has demonstrated the importance of incorporating stage structure in ecological studies and that this information advances both ecological theory and applied efforts. 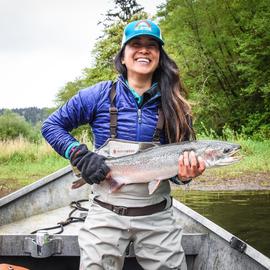