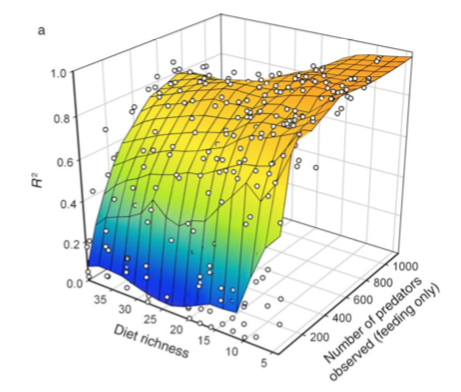 Efforts to estimate the strength of species interactions in species‐rich, reticulate food webs have been hampered by the multitude of direct and indirect interactions such systems exhibit and have been limited by an assumption that pairwise interactions display linear functional forms. Here we present a new method for directly measuring, on a per capita basis, the nonlinear strength of trophic species interactions within such food webs. This is an observation‐based method, requiring three pieces of information: (1) species abundances, (2) predator and prey‐specific handling times, and (3) data from predator‐specific feeding surveys in which the number of individuals observed feeding on each of the predator’s prey species has been tallied. The method offers a straightforward way to assess the completeness of one’s sampling effort in accurately estimating interaction strengths through the construction of predator‐specific prey accumulation curves. The method should be applicable to a variety of systems in which empirical estimates of direct interaction strengths have thus far remained elusive.