Fluctuations and spatial heterogeneity of habitat and resources is thought to underlie niche variation in animal populations, with intraspecific differences serving to produce or maintain population-, community-, or ecosystem-level patterns. Individual diet variation, defined as individual variation in food resource use within a population that is consistent over time, is gaining recognition as an important factor influencing larger-scale processes. Spatial and temporal predictability of prey resources, individual movement behaviors, and diet choice may all serve to maintain individual diet specialization. However, the relationships between these factors in establishing and maintaining individual-level variation at ecological scales remains poorly understood. This dissertation provides insight into the dependence of individual diet specialization on the predictability, productivity, and spatial structure of prey by integrating feedbacks between individual behaviors, populations, and communities at local and regional scales.

Foraging theory seeks to understand the relationships between the energetic demands of a predator, prey selection, patchiness of prey, and individual movement. To maximize energetic intake, a foraging predator must balance energy expended by foraging movements with energy gained via prey consumption, with foraging success greatly impacted by the scale of patchiness of prey. In Chapter 2, I correlated scale- dependent prey patchiness and predator feeding rates to predict predator movement in a heterogeneous prey environment. I then compared these predictions to observed movement of a predatory intertidal whelk Nucella ostrina over a 3-month period. I found that combining prey patchiness and predator feeding rates sufficiently explains predator movement rates, highlighting a tradeoff between prey heterogeneity and individual energetic demands in determining predator foraging behavior.

While prey heterogeneity and individual behaviors within a population can maintain variation in individual diet at local scales, the processes that establish individual diet variation requires further study. The lack of environmental predictability has been posited to promote inter-individual differences on both ecological and evolutionary timescales, as tradeoffs between being a prey specialist versus a generalist result in one being favored over the other in certain environmental predictability regimes. In Chapter 4, I used manipulative laboratory experiments to investigate the role of site-specific environmental unpredictability on the relative contributions of learning and heritable diet plasticity in shaping the foraging efficiency of whelk hatchlings. My results indicated the importance of learning in individual foraging and prey handling efficiency. Additionally, there is suggestive evidence that prey predictability at the population source location decreases foraging times as well. However, site attributes or behavioral modification may play a larger role than prey predictability in determining individual foraging abilities I detected. 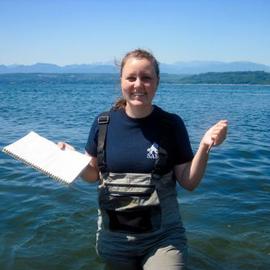